Home
English (US)
Video offers evidence of torture by officials
Yesterday the US State Dept. issued it's annual report on human rights abuses in nations around the world.   In that report in the section dealing with Mexico. 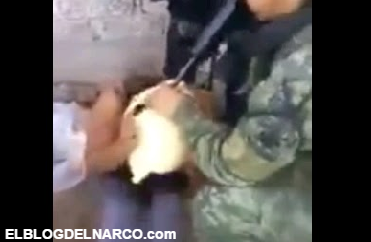 The State Department said the most significant problems included police and military involvement in serious abuses, such as unlawful killings, torture, and disappearances, Whether by coincidence or just good news coverage,  DiariodeMexicoUSATV, posted today (the day after the US report on human rights violations) on YouTube a video that offers pretty good proof of the charges in the State Dept. report.  It is of a women, bound and sitting on the ground, surrounded by a man and a woman, both in military uniforms and what appears to be another  person in a Federal Police uniform.
The female soldier is shown putting a plastic bag over the woman's head and wrapping it tightly.  At one point putting her rifle to the captive's head and though the woman can't see it she can feel the end of the barrel pressed to her head.  She is crying through out.
The person in the Federal Police uniform then takes his turn with the plastic bag, and maybe because of more experience at torture, he pushes her onto her back and not only wraps the bag tightly, he holds her down my cupping his hand over mouth and nose.

Impunity was another issue raised in the State Dept. report, stating that it was a problem  throughout Mexico.  with it's very low prosecution rate for all types of crime.

It seems impunity is still alive and well as evidenced by this incident.  PGR (the Attorney Generals Office-which has a special division for investigating and prosecuting crimes of torture) said that it had started it's investigation 3 months ago (a year after the incident) but that none of the alleged perpetrators had been detained.

The Army said it had learned of the incident in Dec. (10 months after it happened) and began it's investigation in January of this year.  The Army spokesman said a captain of the Military Police and a soldier had been taken into custody and were currently in a military prison.

The Federal Police said they would support the PGR in it's investigation and that the Internal Affairs Unit of the Fed. Police had begun an investigation as a result of viewing the video which it described as uniformed personnel "mistreating a woman."

In Washington yesterday, the undersecretary of multilateral affairs and human rights in the Foreign Affairs Secretariat conceded there are human rights challenges facing Mexico. “We have never denied that Mexico faces threats and challenges in terms of human rights,” Miguel Ruiz Cabañas told reporters.

He said “a great effort” is under way on the part of the federal government to attend to all the challenges that Mexico faces.